Campus Board of Trustees 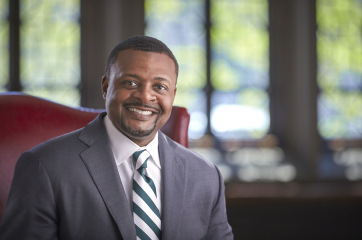 Lorenzo Lamar Esters is the Chancellor for the Ivy Tech Community College Indianapolis service area. Prior to joining Ivy Tech in July 2021, he served as Vice President for Advancement and Member Engagement with the Association of American Colleges and Universities, a higher education association representing more than 1,200 two- and four-year institutions located in 50 states, the District of Columbia, 3 U.S. Territories and 25 countries.

He previously served as Executive Director for Higher Education Partnerships within the Global Education Division of Educational Testing Service, where he led the “Skills for a New Economy Initiative”, an effort focused on creating new solutions for workplace success by visualizing the skills, capabilities and knowledge needed to thrive in a changing economy.

Dr. Esters’ professional experiences have been uniquely centered on generating philanthropic and institutional capacity to support student access, completion, and career readiness efforts, particularly for those from marginalized backgrounds. He previously served as Vice President for Philanthropy at Strada Education Network, a nonprofit corporation located in Indianapolis, IN. He was the inaugural Vice President for Student Success and Enrollment Management at Kentucky State University, where he managed a budget of $12 million and a total of 85 employees responsible for supporting the co-curricular and holistic development of students. There, he led efforts that resulted in increased student enrollment and retention and built partnerships with businesses such as Toyota Corporation that provided paid internship, mentorship, and job opportunities for students.

Dr. Esters previously served as Vice President for the Association of Public and Land-Grant Universities’ (APLU) Office for Access. Demonstrative of his entrepreneurial leadership skills, he has developed partnerships between higher education institutions and private and federal agencies, and with institutions internationally in an effort to build student recruitment, study abroad, and research capacity.

He has managed a portfolio of over $17 million in grants to higher education institutions nationally and has secured over $3 million in funding, including to support the development of the APLU Minority Male Science, Technology, Engineering and Mathematics (STEM) Initiative, an effort designed to incentivize partnerships between two- and four-year institutions toward increasing the numbers of minority males who pursue STEM careers.

Prior to his arrival at APLU, he served as Senior Advisor to the President of Dillard University in New Orleans, Louisiana. He has over ten years of experience as a career federal employee including serving as Management and Program Analyst in the Office of the Assistant Secretary for Elementary and Secondary Education at the U.S. Department of Education.

Dr. Esters’ scholarly publications examine entrepreneurial leadership in community colleges, equity, access, and completion in higher education. He has served as adjunct professor of English at Jackson State University in Jackson, Mississippi, and at Montgomery College in Rockville, Maryland. He is the former Vice Chair of the Board of Trustees at Northern Virginia Community College and has served on the Board of Directors for Democracy Federal Credit Union.  He also served as a member of the Board of Trustees for Martin University located in Indianapolis, IN.

Dr. Esters is the grandson of sharecroppers from the Mississippi Delta and is the first person in his family to graduate from college.