COLUMBUS — Kim Haza, program chair of industrial technology and advanced manufacturing at Ivy Tech Community College’s Columbus campus, and Jim Silberstein, assistant professor in the Gayle and Bill Cook Center for Entrepreneurship in the School of Business at Ivy Tech’s Bloomington campus, traveled to Wuxi, China, Columbus’ sister city, to teach electronics, compare curricula and programs, and discuss business practices with faculty in the Professional College of Science and Technology in Wuxi.

The trip, which occurred October 7 to 30, is an outgrowth of the agreement signed in November of 2010 by officials of Ivy Tech Community College and the Wuxi Professional College of Science and Technology to become sister colleges. The trip furthered one of Ivy Tech’s primary strategic plan goals – to ensure that Indiana’s citizens, workforce, and businesses are globally competitive. Benefits of the agreement to both colleges include faculty and student exchanges and study abroad opportunities. Following this visit to Wuxi, a return visit during the following spring semester by a Wuxi faculty member to Ivy Tech-Columbus/Franklin occurred, and this faculty member taught Ivy Tech’s students and discussed curricular matters with faculty.

Haza taught electronics and participated in several panel discussions, focusing on the differences between the United States and China in a college education, especially in the field of electronics; the professional electronics course in the U.S.; and American electronics laboratories. Silberstein lectured on entrepreneurship as well as marketing and finance for small business.

Wuxi, China, is 80 miles from Shanghai on Tai Lake and has a population of over four million; it is one of China’s top 50 cities, nicknamed “Little Shanghai” for its growing economy. Cummins Inc. has key production bases in Wuxi. In addition to their other responsibilities at the college, Haza and Silberstein toured the Cummins factory reviewing Chinese business practices and clarifying any workforce concerns.

Sue Smith, Corporate Executive for Advanced Manufacturing in the Office of the President of Ivy Tech Community College, commented: “This trip has as its primary goal to build upon existing relationships in Wuxi and to establish trust and understanding in order to facilitate future workforce training and faculty and student exchanges.” 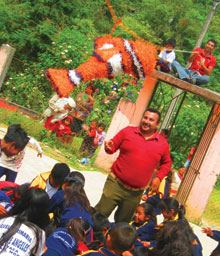 In 2012, 11 Ivy Tech Community College-Bloomington student volunteers, ranging in age from 18 to 40, traveled to Antigua, Guatemala through Ivy Tech - Bloomington’s Alternative Spring Break program. This was the first service trip to Guatemala for Ivy Tech - Bloomington, but its fifth international service trip. The first year, in 2007, Ivy Tech volunteers traveled to Virginia and then to Calnali, Mexico the following four years.

Students and three Ivy Tech faculty members stayed in resident host-homes in Antigua during the week of March 12. Working with Maximo Nivel, a nonprofit organization, students laid concrete and installed support beams in a home that was built for a woman who runs an after-school program out of her home. Students also worked in the after-school program and interacted with the children. Ivy Tech volunteers took Spanish-language children’s books to donate to the after-school program. On the final day of the trip, volunteers traveled to climb Pacaya Volcano, about an hour outside of Antigua.

“The amount of applications we receive for Alternative Spring Break continues to grow each year,” said Chelsea-Rood Emmick, director of Ivy Tech-Bloomington’s Center for Civic Engagement. “Some of the students who participate in the program experience many firsts, including first time out of the country and even first time on an airplane.”

The following are excerpts from reflection journals written by students who went on the trip.

“From this trip and these experiences, I want to bring back happiness in the present moment. I want to smile at strangers and greet them in the street. I want to be content with what I have and find little adventures out of the ordinary. What a trip!

The house we worked on is made of plastic tarps and left over materials that the owners probably collected from somewhere. It has dirt floor and the bathroom has a broken toilet that it seems somebody just placed on the ground. They are very poor and yet still helping others by having the aftercare program so that kids can have a warm meal and still learn after school. I’m so grateful to have been given this opportunity to come here and help others. It may not be much but with 14 people here this week, I’m sure we are gonna [sic] get something done.” - Maria Monteilh

“We flew from Indianapolis to Houston where we had a four hour layover. (It was supposed to be three, but the plane’s windshield was leaking, yikes!) From Houston we all flew to Guatemala City. When we arrived I was so excited, I had never been to Central America before. 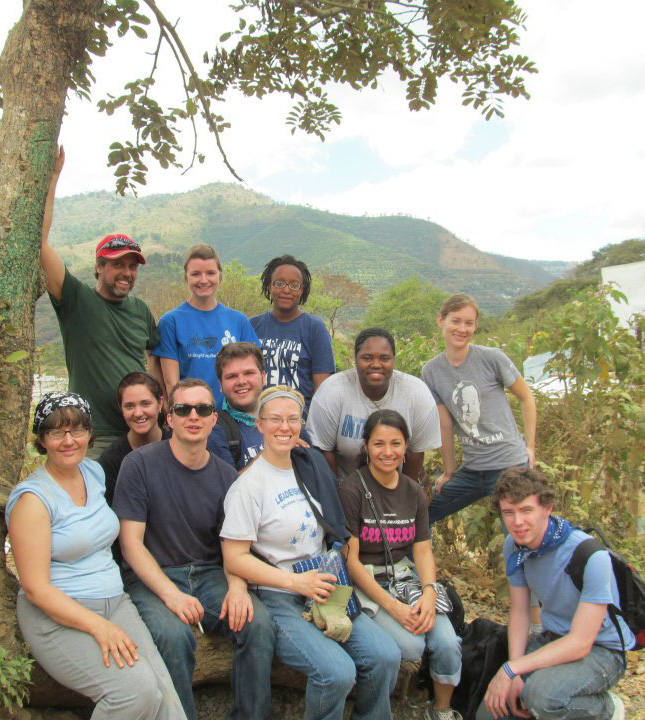 Wednesday night I went to a jazz show at the ruins, it was great! The director of the band played Chromatic Harmonica. I got my picture with him and he gave me a CD. On the way home I heard some live American rock music in a place called Frida’s. I went in and talked to the guys on their break. I told them I played harmonica and sang. They asked me if I would like to sit in, and I did.” - Billy Smith

“Today Maximo Nivel had arranged for us to meet with the kids from the aftercare program so we could get to meet them and play with them. We were divided into groups. I got to read and color with the kids and it was such a great experience. They were so happy to see the many books we brought in for all of them. Every one of them wanted to read. It seems that kid’s books in Guatemala are very expensive and these families are very poor so they can’t afford to buy books, but now they have plenty of books, enough to have their own little library. They were very grateful for our visit. I had a great time seeing how enthusiastic the kids were. It was a great experience. Today was definitely the day that I will remember the most. Sweet smiles and hugs!” - Victoria Kirts

14 students traveled to Calnali, Mexico on the college's fourth annual Alternative Spring Break trip. The group poured concrete floors in dirt-floor houses and donated bags of shoes and clothing to the impoverished community.

"The best part of the program is watching the students come together as a family and support each other," Chelsea Rood-Emmick, director of the Ivy Tech Center for Civic Engagement said. "The work is hard and there are hard challenges, both physically and emotionally. The group lifts each other up and cheers each other on to work harder. They become fast friends and continue to do charity projects together when they come back to the states." 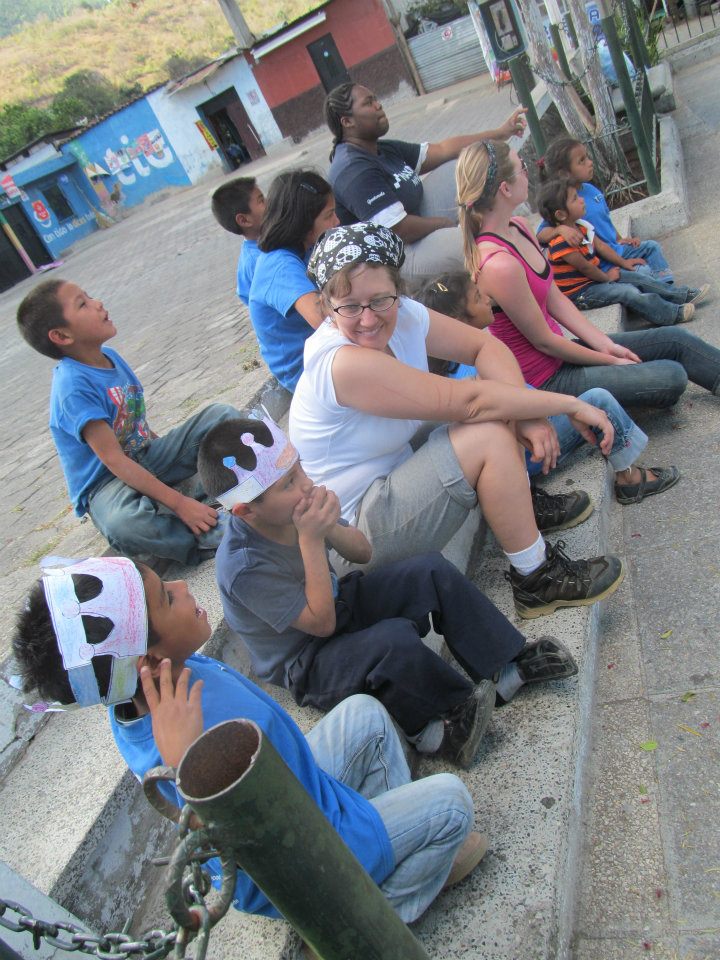 The impact this experience had on students is best told through their stories. The following are excerpts from reflection journals written by students who went on the trip.

"Our work site was a little home made of sticks, metal sheets, and some other random materials. The lady who lived there had four sons but they had one bed. We were doing concrete just outside the house so that the boys could have a place to play so they wouldn’t fall down the hill. We had thought we were going to have to carry the materials (gravel, rocks, sand, and concrete) up the last huge hill. Thankfully, the material truck was able to barely squeeze onto the path and up to us. We paid the driver an extra 100 pesos." – Daniel Stec

"Traveling to the village and passing out shoes to the children was probably the most life changing event for me. One girl had on shoes that were two sizes too small. Her feet were black with dirt and had swollen over the top of the shoe. I finally found a pair that would work and had to be much more comfortable on her. She smiled, took them off, and put the small ones back on. She said she did not want to wear them out." –  Larry Weaver

"The architecture is gorgeous. The style of building is so inviting and diverse. Definitely a good switch up from things like apartment complexes and subdivisions." –  Biz Strother

"I’ve never slept so good in my entire life. All this healthy fresh food, hard work, and walking everywhere not only is my mind changing, so is my body. They are going to have a hard time getting me back on the plane!" – Jerrilyn Zeigler

"This morning the police found us a vehicle for our trip up the mountain to the Indian village. The vehicle was a cattle truck. In a word… awesome. All twenty of us piled into the back. It was hot, cramped, and pretty much the coolest thing ever." – Victoria Kirts 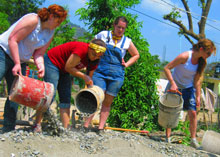 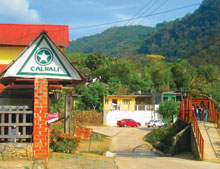 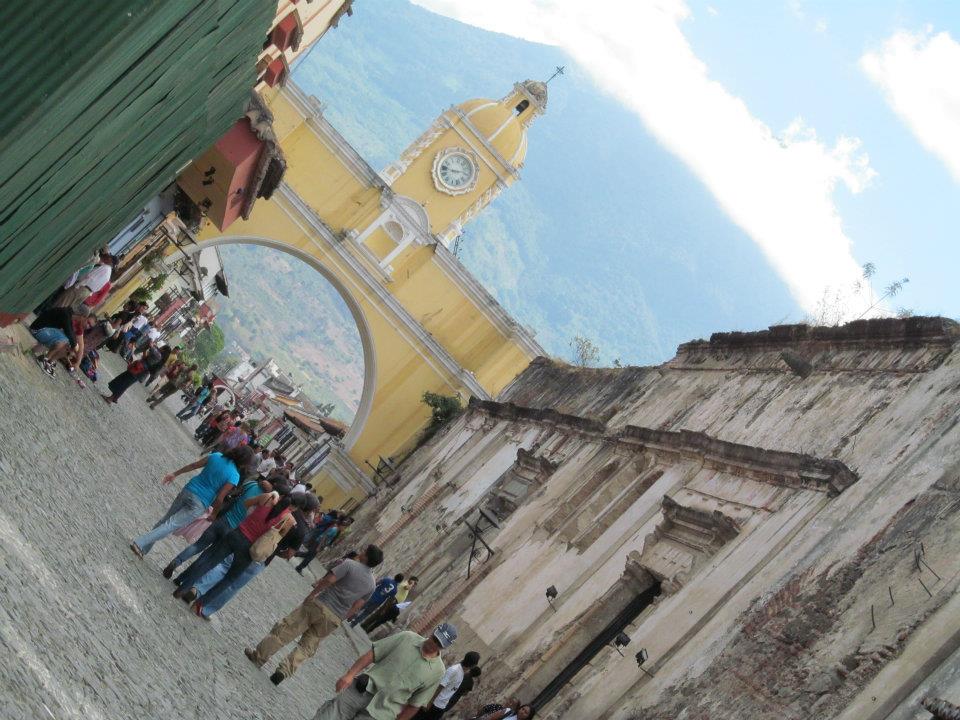 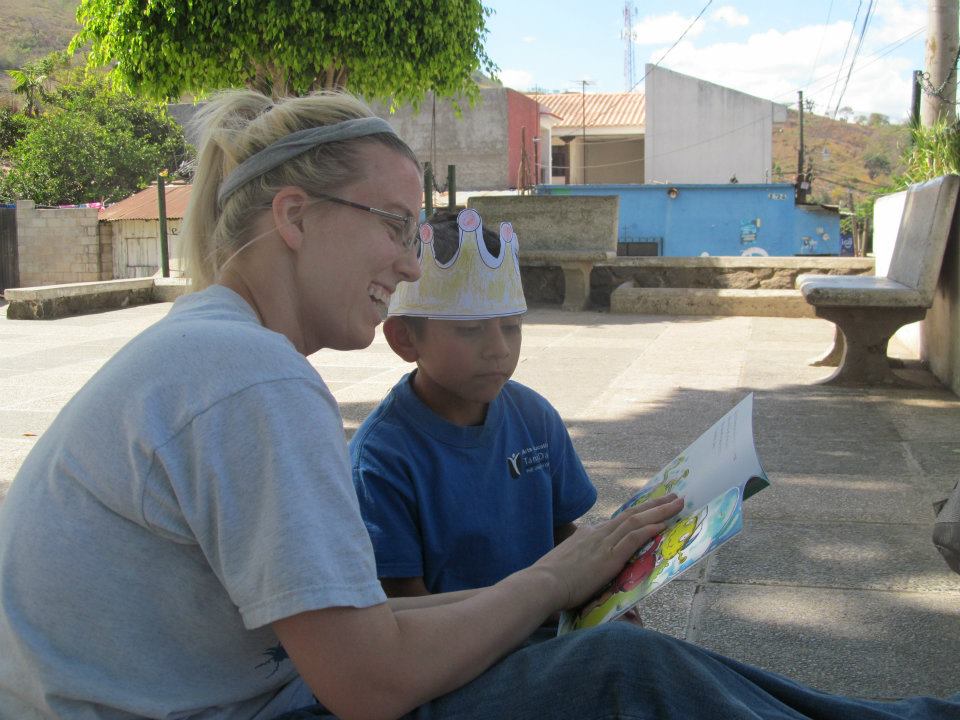 Eight students in Ivy Tech Bloomington class Business 294 spent two weeks at the University of Glamorgan in Treforest, Wales. The course was an eight week class that began in the classroom at Ivy Tech June 6. The students lived in dorms in Treferest for a week and Cardiff for a week, and studied international business. Students spent some days in the classroom, and other days visiting local businesses and museums. 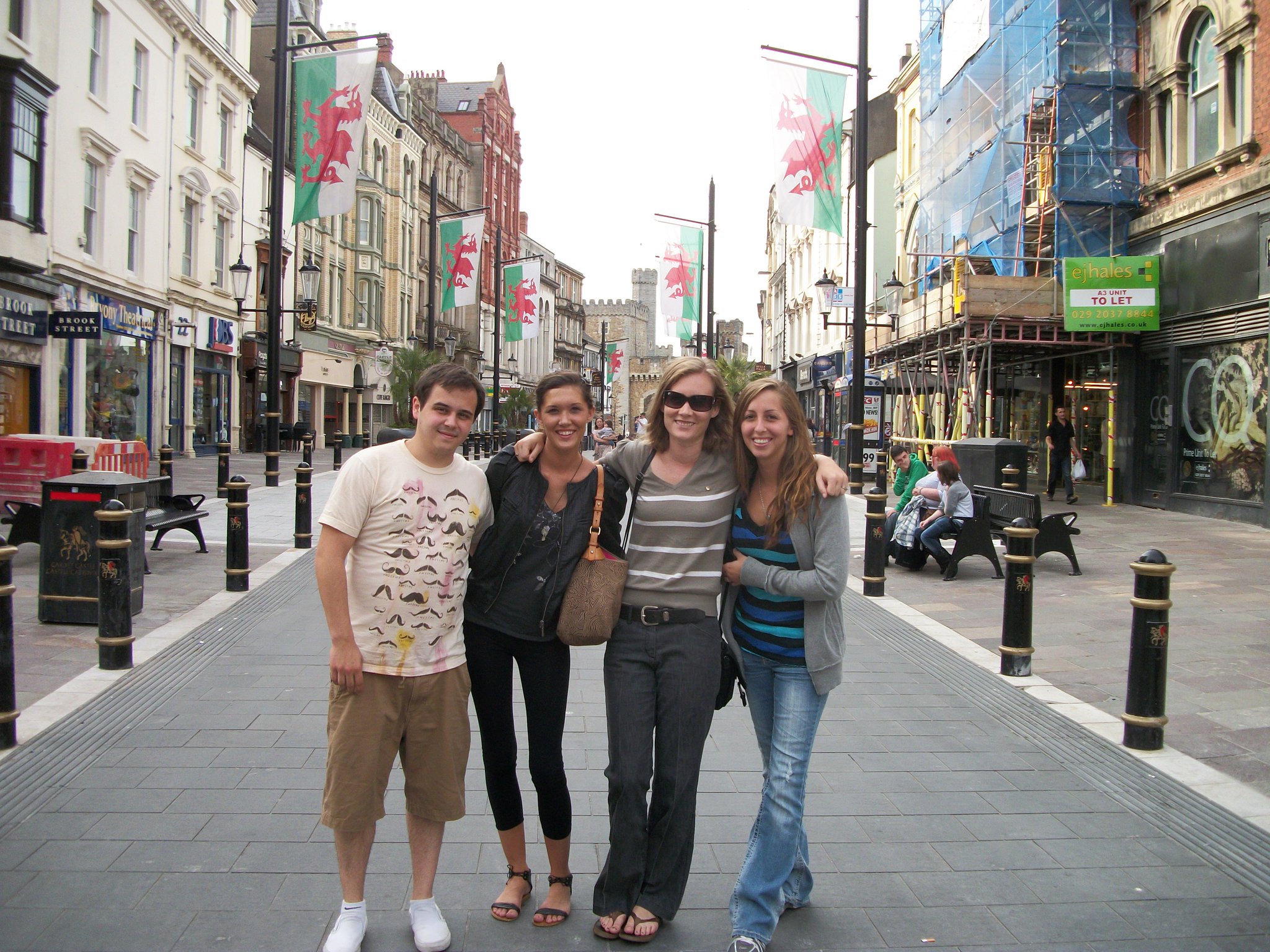 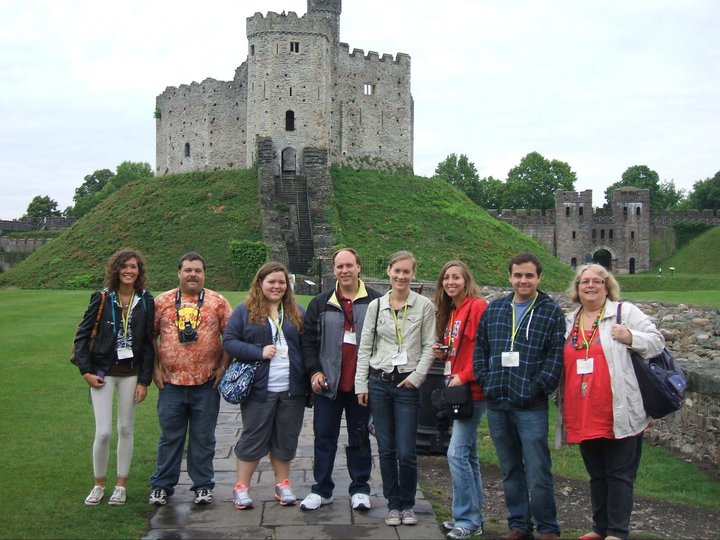 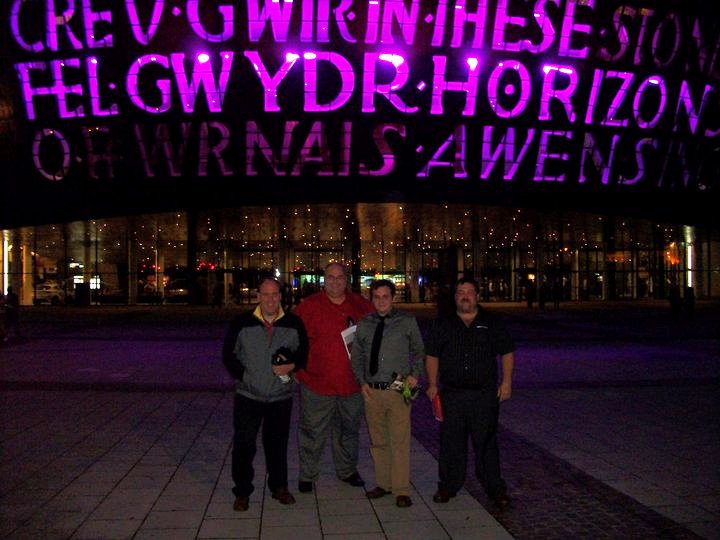