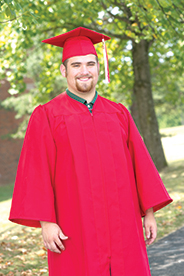 Even though he’s in his first semester at Indiana University, Michael Lakes already has ambitious plans beyond a bachelor’s degree. A business management major with a minor in sociology, Lakes is planning to complete an MBA after graduating from IU in 2015.

This forward-thinking approach is nothing new for Lakes. In fact, he began earning college credit even before enrolling at IU, thanks to the Ivy Tech Community College dual credit program. Dual credit allows high school juniors and seniors to simultaneously earn both college credit and high school credit. Lakes took full advantage of the program, entering IU having earned 37 college credits.

“I thought it would be helpful to get as many credits as I could before going into college,” Lakes says. “I got most of my general education courses out of the way, which has allowed me to focus more on my area of interest.”

Lakes is one of more than 25,000 Indiana high school students who enrolled in Ivy Tech’s dual credit program during the 2010 -11 academic year. He learned about the program while attending Connersville High School, which has been a leader in giving students access to dual credit opportunities.

One of the most ardent proponents of dual credit is CHS principal Patricia Flowers, Ed.D. Dr. Flowers says she makes dual credit a priority because it aligns very well with the school’s focus on     student success.

“We have worked with Ivy Tech’s department chairs to plan pathways so CHS students can earn as many credits as possible toward acquiring an associate degree while in high school and a bachelor’s degree after it,” Dr. Flowers says. “The dual credit program helps many more students understand that a college degree is possible for them.”

One reason the program has become so popular is that dual credit courses are free, which provides families with a significant cost savings as a result of avoiding the cost of college credits satisfied via dual credit. During the 2010-11 school year alone, Ivy Tech’s dual credit program allowed Indiana families to save more than $12.2 million in college tuition costs.

Looking back on his experience, Michael Lakes says that he felt he pushed himself a little by enrolling in dual credit courses. Because he received the support he needed to succeed, however, he says it was well worth it.

“The dual credit classes were taught in a way where you had more access to the teacher,” Lakes says, “which is helpful when compared with the big lecture classes at IU. The material can be difficult but it’s very helpful to do it as a high school student because it affords you the opportunity to do more in college.”