Article from The Wall Street Journal

The typical community-college student works at least part time while attending classes and often doesn't complete a degree even after three years, according to the U.S. Education Department. 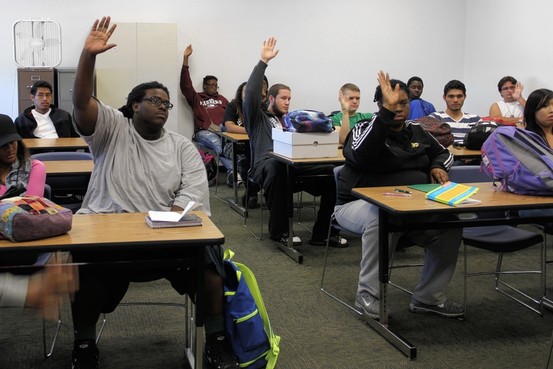 Derrick Johnson is on a different track. The 19-year-old first-year student from a low-income neighborhood of Indianapolis received a scholarship for spending six hours in class each day and another six hours a day studying with classmates. He has pledged not to work during the week. His scholarship, besides tuition and fees, also helps cover expenses, such as some food and transportation costs. Best of all, he expects to earn an associate's degree by May, within one year.

Mr. Johnson sleeps on a couch at his dad's house and rises at 5 a.m. He then rides two buses for about an hour to get to school each day by 7 a.m., and usually leaves campus by 7 p.m. His weekdays consist of little more than attending class, studying and commuting. Other students have more breathing room because they can drive to school, avoiding a lengthy trip on public transportation.

"It takes up a lot of time," Mr. Johnson said. "But I can get stuff done in a year and the cost is less" than a traditional two-year associate's degree.

Mr. Johnson is part of an experimental program at Ivy Tech Community College, a public community college in Indiana. The Associate Accelerated Program, known by the nickname ASAP, aims to chart a new path to a degree as two-year schools across the nation wrestle with poor graduation and retention rates and a growing need to upgrade the skills of people entering the workforce.

"The big thing is that ASAP is reaching students who are very hard to reach, and they are reaching them successfully," said Dewayne Matthews, vice president of policy and strategy at Lumina Foundation, a private group focused on education that provided $2.3 million for the program's launch in 2010. "This is about designing education around the student rather than fitting the student around a system that we already have in place and that was not designed for them," he said.

Yet some backers question how widely the program can be applied because of its high cost and reliance on heavy backing from foundations.

But early results are hard to ignore.

After three years of small-scale trials, about 70% of ASAP students have an associate's degree in 12 months, according to Ivy Tech officials. On a national level, about 31% of students earn degrees at two-year schools within three years of enrollment, according to the Education Department.

The ASAP program is up and running at Ivy Tech's Indianapolis campus and three others. Buoyed by an additional $2.2 million from Lumina, officials at Ivy Tech plan to expand the program to the rest of Indiana within the next two years and aim to produce 1,000 graduates a year at Ivy Tech's 14 campuses over time.

"It's important for programs around the country to see this and consider how it might work for them," said Carrie Warick, director of partnerships and policy at the National College Access Network, a Washington-based nonprofit that focuses on educational attainment. Ms. Warick says that if the programs are going to be sustainable in the long run, the students might need more government help than they get now to complement foundational support.

Officials recruit ASAP students—most of whom qualify for federal and state grants that cover their tuition—through local high-school counselors, who are told to look for low-income students in their senior years with grade-point averages of at least 2.5. Students usually qualify for state and federal grants covering the full cost of the program, according to school officials, including Pell grants. Program officials discourage relying on loans.

Mr. Johnson, who aims to become a computer scientist, said his high-school counselor recommended he apply for the program. Meeting the criteria, he earned a spot last May and graduated from high school last June. After finishing the program, he hopes to transfer to a four-year school for a bachelor's degree, and maybe pursue a master's degree after that.

The program keeps students in small classes with the other ASAP students, provides a designated space for them to study together and advises them on everything from study habits to family issues.

In exchange, the students and their guardians sign pledges stating the students will to live at home during the program's roughly 11-month run and won't take a job during the week.

ASAP officials say other accelerated associate's degree programs exist but none come with such a comprehensive support package in a one-year time frame.

But education experts and officials alike wonder about the longevity of the program, given its high upfront costs and dependence on private aid. Indeed, around 300 students have enrolled in the program at a cost of $2.8 million so far. Now, the expansion project totals about $5.3 million, of which $3.1 million is coming from Ivy Tech. Federal grants cover much of the approximately $10,000 for tuition and supplies at Ivy Tech, but additional funding is needed for student expenses, such as transportation and food.

"We're still concerned about that," said Thomas Snyder, president of Ivy Tech, which serves about 175,000 students, referring to the student expenses. "We want to reach kids who won't persist through college otherwise," he said.

One recent morning, ASAP student Kadi Cooper, 18, heated up Beefaroni in the Ivy Tech cafeteria. The Indianapolis native was having an early lunch to get a head start on her homework. Ms. Cooper wants to open her own pastry shop someday and sees ASAP as the cheapest and fastest way to get there. She is taking liberal-arts classes and hopes to transition to business courses for her bachelor's. For now, she works at Subway on the weekends and lives with her mother at a family friend's house.

"In some ways, this is like high school," she said as she walked back to the study rooms. "It's a lot of work and long days. But it's worth it."